Malta: a Business Solution after Brexit

In June 2016 the government of the United Kingdom (UK)called a referendum to end up a continuous discussion regarding the advantages and disadvantages of its membership in the European Union (EU). The UK citizens voted to leave the EU and in March 2017, the UK officially informed the European Council of its intention to start the procedure of Brexit.

The UK’s decision to withdraw from the EU has put at risk the status of British citizens and the position of UK based enterprises on the European single market and customs union.  The Prime Minister of the UK, Theresa May, insists on leaving the single market as well as the customs union, which means that the UK will no longer fall under the European Court of Justice’s jurisdiction. However, the negotiation process is not over yet, but the stock market has already experienced an exchange rate volatility.

At this stage, it seems that Brexit will occur on the 29th March 2019, regardless of whether or not the UK finalises a deal with the EU. The European Securities and Markets Authority (ESMA) proclaims that its mission is to protect investors and ensure the stability of financial markets. ESMA also promotes continued access to UK CCPs in order to minimize any possible negative impact on the financial stability of the EU, and urges all market participants to prepare for a potential no-deal Brexit.

Leaving the EU without reaching the deal would potentially result in the disruption of 200,000 British businesses currently operating within the single European market and decrease in trade turnover. The questions regarding the rights and status of UK citizens in the EU and EU citizens in the UK, remains unclear and highly disputable. Statistics shows that there are 13,000 British citizens exercising their EU treaty rights in Malta and the priority of the Maltese authorities is to make sure that their interests and entrepreneurial activities will not suffer from the Brexit impact.

Brexit will undoubtedly impact Malta as an English-speaking country and the member of the Commonwealth with a very strong economic relationship with the UK. Both countries have a long-lasting tradition of cooperation, where several bilateral agreements were signed to protect individuals and businesses from any negative experiences following Brexit.

One of the possibilities for British citizens living in Malta to go through the transition period is to acquire a new residence document, which will be valid up to 10 years. British citizens who successfully applied for tax status under the High Net Worth Individuals and Residency Programme will not lose the benefit of paying tax at the rate of 15%.

Maltese citizens living in the UK need to apply for a new residence document – being referred to as Settled Status or Pre-Settled Status. Applications for this new status will be open till the end of June 2021. Due to the Malta-UK Health and Social Security treaties, both British and Maltese citizens will keep social security and health benefits on the territory of both countries.

Malta based enterprises trading with the UK will be aided to mitigate the effect of Brexit. Malta with its attractive tax regime, developed financial services, i-gaming, shipping and aviation sectors, is a beneficial alternative for British individuals and businesses, should they decide to relocate after Brexit.

The article has been published on the Malta Independent on Sunday, 24 March 2019 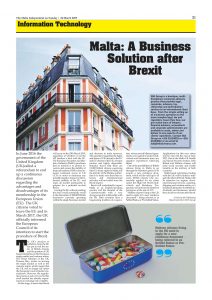