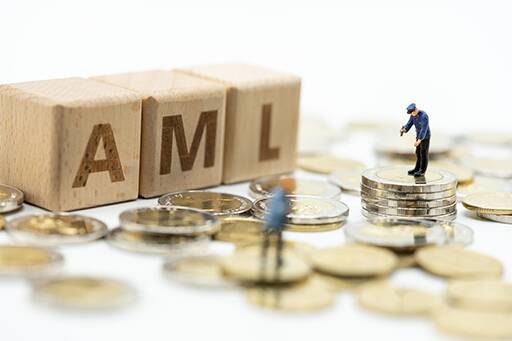 Should there be a unified EU AML/CFT Supervisor?

Home » Should there be a unified EU AML/CFT Supervisor?

Legal associate Jacob Portelli for E&S Group has highlighted “insufficient” methods of information sharing between EU member states as imposed by previous EU anti-money laundering (AML) directives, and has pointed towards support for a singular EU body to deal with money laundering crimes.

“The AML regime is a topic which has been widely spoken about these past years. It is not a surprise that problems arising with financial institutions within the EU and USA have led to heated debates on the AML framework and questioned its sufficiency.”

Pointing towards various scandals, he continues by saying “Banking and institutional scandals have rocked the EU, with the recent money laundering scandal of the Estonian branch of Danske Bank being the latest of a worrying series. As has been echoed by the former ECB Supervisory Board Chair, Daniele Nouy, the EU’s overreliance on its US counterparts for financial intelligence has raised questions on the effectiveness of its AML/CFT framework.”

The EU’s 5th AML directive, which has been aimed at closing loopholes and tackling shortcomings from the 4th directive is the latest addition to the EU’s AML regime. It covers modern financing developments such as cryptocurrencies and anonymity.

“While this amended directive looks to strengthen the EU AML/CFT regime and tackle loopholes and emerging technologies such as virtual currencies, certain underlying issues persist – most notably, the lack of uniform implementation in the AML regime and the insufficient cooperation between the respective supervisory authorities.”

Dr Portelli highlights issues stemming from a lack of uniformity as being the reason behind EU level support for a single EU body to handle supervisory tasks:

“Moreover, the problem of dual criminality in extradition law, ineffective coordination and support for FIUs carrying out their general tasks (including joint analysis), as well as the unclear supervisory responsibilities in cross-border activities has led individuals to propose the setting up of a single EU body to handle all Union-wide supervisory tasks.

“In fact, in a meeting of the EUROFIN council, which took place on 10th October 2019, the discussion on the AML directive took centre stage and the idea of changing such a directive into a regulation as well as empowering a single EU body for supervisory tasks was put forward for discussion. Undoubtedly, these discussions highlight the EU’s intention to continue improving its AML/CFT framework and its zero tolerance towards financial crime.

“The ‘patch work’ of AML legislation in the EU, the current information-sharing mechanisms between supervisory authorities, and the money laundering scandals across the EU have reinforced the idea of this potential transformation of the AML directive into a regulation as well as unifying the supervisory powers under a single EU body. The Council is set to take a decision by the end of the year, so whether all this is to come to life is yet to be seen. If it does, it is reasonable to expect greater economies of scale as well as more effective and efficient high-profile prosecutions.” 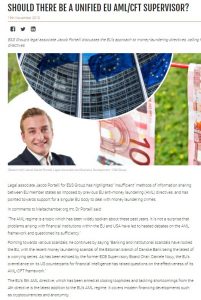 Jacob joined E&S Group as a legal trainee in March 2018. Prior to joining E&S Group, Jacob had interned at a leading law firm in Malta, assisting in criminal, family and civil law matters. Jacob holds a Bachelor of laws with Honours and a Master of Advocacy degree from the University of Malta. Jacob completed his studies with a legal paper on Investor Protection in Financial Services. He has also completed a Master’s degree in International Business and Corporate Finance Law at the Liverpool John Moores University with a dissertation on Anti-Money Laundering Legislation and Cryptocurrency within the European Union. Jacob has been greatly involved in student organisations, previously occupying the role of President of the Malta Law Students’ Society, Education Commissioner of the National Students’ Council and the Faculty of Laws Student Representative. Jacob was also a Board Member of the Refugee Appeals Board. Jacob is now focusing on client relations and business development to help maintain a holistic relationship between E&S and its clients.

Jacob is fluent in English and Maltese.